The Axis And The Sycamore, By Paul Kingsnorth

“Only a god,” Heidegger famously said, “can still save us.” An atheist would disagree, but I think that on this one, the atheist would be wrong. While we might not need a new religion, we do need a new sense of the sacred or an awakening of the most ancient one: a sense of awe, wonder, and respect for something greater than us. What could that something greater be? There is no need to theorize about it. What is greater than us is the earth itself—life—and we are folded into it, a small part of it, and we have work to do. We need a new animism, a new pantheism, a new way of telling the oldest of stories. We could do worse than to return to the notion of the planet as the mother that birthed us. Those old stories have plenty to say about the fate of people who don’t respect their mothers.

Introduction To Savage Grace: Living Resiliently In The Dark Night Of The Globe, By Andrew Harvey and Carolyn Baker

Let’s get real and face together the likelihood that the human race now has two possibilities before it: An extreme crisis that leads to the survival of a bedraggled and traumatized remnant in a vastly degraded world, or the total annihilation of that world. We can never rule out, of course, the possibility of a sudden evolutionary leap in humanity or even miraculous divine intervention, but we would be narcissistic fools to count on them. We have come to the current situation because we have drunk a deadly cocktail of illusion. Our only hope now, rugged though it is, is in daring to live beyond the need for any kind of magical thinking—beyond, in fact certainty of any kind. We must take complete responsibility for the horror we have engendered and for the response we are now called to make to that horror, whatever happens. Such a response demands of us something far deeper than what conventional religions and visions of activism call for–nothing less than living and acting from the Self, both without illusion and totally committed to compassion and justice even, if necessary, in hopeless situations.

The Infinite Spiral Of Evolution, By Deb Ozarko

In my quest to master impermanence, all that I continue to let go of, liberates me further from the illusion that I no longer subscribe to. I confess that I’ve yet to discover a means of removing myself completely, and from bearing witness to the nightmare the illusion is. I remain open to the possibility however; a possibility free from denial, despair, mood altering substances, altered states, pharmaceuticals, anti-depressants, or other dramatic measures that only serve to hinder the evolution of the Soul. As much as I want “out”, if I am here at this time to be fully present, holding space and bearing witness to the end, so be it. Mastering impermanence—as a middle aged nomad in a 30 foot RV—may just be my ticket to sanity (and enlightenment?!) in these increasingly insane times.

The Cultural Sickness That Needs To Be Named, By Joe Brewer

This culture tells us that humans are selfish and greedy. It says that we are nothing more than individual islands of ego floating in a sea of chaos. It is the Great Myth of Separation that takes many forms. We’ve seen it as humans apart from nature, reason divided against emotion, body separate from mind, one tribe distinct from another. This mental tendency to categorize the world according to its separations is the root cause of illness in the world today.

Alex Smith’s Radio Ecoshock: A Complete Coverage Of My Work With Audio

Carolyn Baker is a one-woman whirlwind of communication. She’s up-to-date on the news of the world, as she publishes her Daily News Digest. Carolyn is author or co-author of 11 books, has provided life-coaching for many, and leads workshops. Her motto is “Speaking Truth to Power”. From Boulder Colorado, it’s a treat to welcome Carolyn Baker back to Radio Ecoshock. Alex Smith devotes an entire page to covering my work

Navigating The Trumpist Chapter Of Civilization’s Collapse, By Carolyn Baker

In a recent article “Beyond Trump: Rebooting the System from inside the Death Machine,” Nafeez Ahmed, Andrew Markell, and Gunther Sonnenfeld articulated their perspective on Trump’s rise to power less succinctly and with fewer no-nonsense tools than I intend to offer in this essay. While coming close to the heart of the matter, they didn’t quite arrive which often happens when attempting to clarify “the crisis of civilization.” After all, we’ve never been here before, and if we’re honest, we must admit that we have difficulty articulating it for ourselves and never quite know how to articulate it to others.

Susan Tchudi speaks with with Carolyn Baker about her new book “Dark Gold: The Human Shadow and the Global Crisis.”

Creating an Island of Sanity in a Sea of Global Chaos

Creating an Island of Sanity in a Sea of Global Chaos by Deb Ozarko Interviews Carolyn Baker | Unplug! Episode #108... 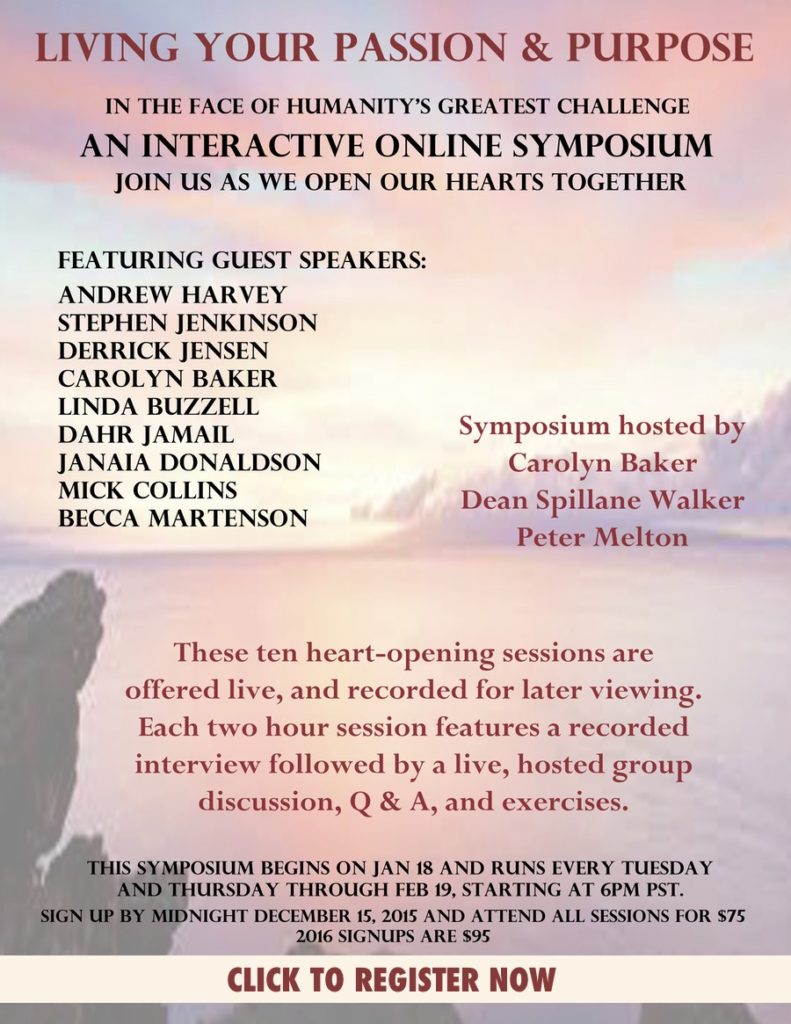 In Defense Of Inaction, By Dave Pollard

But when I hear arguments that “we need” to stand up for our ‘inherent’ rights and freedoms, and wrest ‘control’ of the levers of power from the obscenely wealthy elite, and denounce and protest injustice and inequality, and acknowledge and renounce our role as privileged oppressors, as the first steps to a true social revolution in and political and economic reform, leading, somehow, to a radical redistribution of wealth and power, and a more just society, I am reduced to despair.